For pricing and availablity please enquire online or by phone


Coffee reached Mogiana’s region in 1886 and inherited its name from a railroad company called Companhia Mogiana inaugurated in 1872 to serve the growing coffee business in São Paulo’s countryside. The region is built around 23 towns and 60,000 hectares of coffee growing area. The region shares borders with the main coffee producer; Minas Gerais (a portion of High Mogiana goes into it). An average rainfall of 1700mm and 19.5ºC temperature plays its part in creating the flavour of the region’s coffee. The best description of the climate are hot, wet summers and dry winters with low moisture levels.

Average productivity is one of the highest in the country due to highly active aggressive pruning management that ensures a 30-35% renovation rate annually. Our sister company, Volcafe Brazil assists the regions farmers so their coffee is responsibly produced, sustainable and traceable. Farmers are implementing activities that make their farms economically viable, socially responsible, all the while looking after the environment as well. Farms range from 20 – 50 hectares, all family operated and the coffee produced, fully traceable. The location of the area, close to São Paulo state, also allows the farmers access to the service and knowledge network of agricultural consultancy bodies, research centres and universities.

Coffee is rested for 30-40 days in specially made wooden storage containers prior to milling, a stage that is often not mentioned but again plays a part on the overall flavour of the coffee. 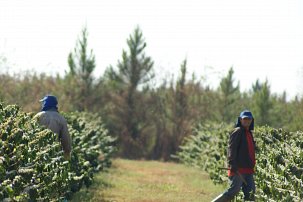 MORE FROM THIS ORIGIN

To the point advice and market experience

Green Coffee Partner to the Australian Roasting Community since 1987